What can I say? Time and Place is always a factor. Always. And keywords, of course. 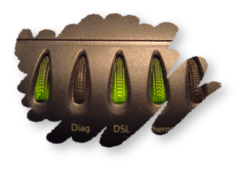 True, there may not be much corzblogging getting done this month, but I sure have been streaming a lot of text onto the web this last couple of weeks, mainly focused around this page, which google loves*.

Anyway, if topics like router hacking, port-forwarding, peer-to-peer networking, stealth firewalls, port probing (including a brand new live online p2p port probe) and suchlike interest you, then head along and join in the fun. So far we've destroyed one standard-issue BT voyager 205 router, as well as quell a few nightmares, not to mention come up with some certifiably funky hacks.

ps.. I noticed that broadbandreports.com now have a section for the Voyager 205 router in their UK Broadband FAQ. Wisely, rather than delve into this prickly issue, it simply says..

Are you looking for information regarding the BT Voyager 205 ADSL Modem/Router, if so, have a look at the following link:


Time and Place, you see.

something's wrong with my new girlfriend..

she never talks, for a start. I think it may be something to do with the manner of her arrival, the way she was all squished up in that box. it's not right for a woman to travel like that, without handmaidens.

It was all somewhat mysterious. one minute I was working away on some text or other, the next minute, there she was! or rather, a delivery guy. I don't recall asking for a wife, but there you go, some folks do interpret this site text in the oddest of ways. a jar of Tahini would have been fine. (in the style of Captain Jack Sparrow) I got PayPal buttons now mate; safely within your comfort zone!

something's wrong with humans. I've spotted it, maybe you did too. we're not right. it's almost like that's why we're here; to get it right. she has seams running up her legs, look closely at the photos, the latex and silicone workers have some way to go yet, but not that far. it's the the robotics engineers that are holding up the show, stuff she needs inside, and not my man-meat, sir, speech recognition! a voice! well, so long as she responds to "shut the fuck up bitch", I reckon we have a billion-seller.

I said "she", and not "it", didn't I? Perhaps I've watched i robot too many time, perhaps not. they'll take requests eventually, you know, you supply a photo, they make the doll. your ex-partner nightly ass-fucking your silicone likeness. scary.

Something's wrong with mankind, and it's going to take more than funky software to fix it. but it does seem that without funky software, we have no hope, gone too far along this path now, and can't go back. Maybe something's wrong for a reason, maybe the fixing it is what it's all about. Maybe we should get on with it, then.

Of course, I'm a wee bit pissed still, so maybe she's just shy, and I need to sober up a bit and get to know her, intimately.

okay, I just found the link on a torrent site and it inspired an intersting train of thought, is all. I'm not hinting that I actually want one of these smooth (and I wonder if they are internally heated) lovely dolls for myself, no not me. I wonder what they feel like though, maybe hire one for a night, you know, in the name of scientific research

pity about suprnova, it could have went the other way.
sad, the MPAA.