Recently, I upgraded my PC.

My CPU, the newish Intel Celeron G530, intended as no more than a cheapo "placeholder" chip until I can afford a Core iSomething, is actually quite incredible. It's up there in the top all-time best value price-performance slices of silicon in existence. Intel wants to keep the "Celeron" brand alive, see. But it turns out you can only go so low with Sandy Bridge, and that's pretty high, performance-wise.

I almost embarrassingly recouped two thirds of its cost selling off my aging (released May 2003) AMD Athlon XP 3200+. But if you have a Socket A mobo from that era, it's the best CPU you can buy, holds its value like i7K CPU's from now probably will, one day.

This cely CPU has built-in on-chip graphics, does 1080p HD without flinching, plays all but the most demanding of modern games at decent frame rates (albeit with the odd slight loss of quality on the most recent stuff). Real gamers, which I am not, get discrete graphics, anyway.

It does hardware virtualization, I've got an XP Virtual Machine running faster than I used to run the real thing. Thirty Two Bucks! Crazy!

What I'm saying is, unless you have a very recent, fast i5/i7 (yup, this thing trounces many of Intel's previous generation i5, even i7 chips), you can buy into the LGA1155 platform with this dirt-cheap CPU, spending your money on a top-notch Ivy Bridge-capable (that's right-now generation Intel) motherboard. When the perfect Ivy Bridge i7K chip comes out and you have the dosh, you can go supersonic - your mobo is ready.

One day.. Until then I am perfectly happy. Some stuff happens literally 50 times faster now. I've always used fast hard drives, but now I'm really using them. DDR3 is dirt-cheap, too. It's amazing to think, back in ye olde days folk used to break into businesses and steal RAM. These cheap-yet-heat-sunk Kingston sticks do crazy speeds, almost 600Khz over what a G530 is supposed to be able to handle, in another realm to my previously-top-notch Corsair platinum's. 1600 XMP, nae bother.

The Z77X-UD5H could be a factor, an impressive slab of fibre tech by most standards. Don't skimp on the motherboard, people!* Go industrial, military, go sockets for everything you think you won't need. If I ever get a job that requires some crazy-fast SLI or cross-fire-level dual-card graphic capabilities or 2560x1600p output, their up-front will sort it out. I'm ready for anything!

It's been a good experience, aside from the many losses of functionality moving "up" to Windows 7. There's a big Wikipedia page all about it. I have a theory. Microsoft is stimulating third party developers to provide solutions for all these crazy mishaps in its most recent OS releases.

While I'm here, the skinny on a couple of programs that have done exactly that, saved my Win7 sanity, the first Coolbarz, a nifty app for getting back my beloved toolbars. You can stuff them full of shortcuts to your favourite stuff, even shortcuts to 7Stacks shortcuts, another nifty app, this time popping up menus of shortcuts, even sub-menus (it also does other much less functional and elegant (but more mac-like) "Stacks" and "Grids", if that's your bag, though not as prettily as the otherwise disappointing (read: slow) StandAloneStack).

Between Coolbarz and 7Stacks, it's almost like getting back XP's wonderfully functional, built-in toolbars... 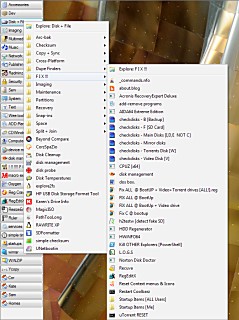 It's just a pity 7Stacks craps out so much. Och well, plenty opportunities for third party developers!

And I can't leave without giving ShellFolderFix a HUGE shout. As you will have noticed, it doesn't have its own website, just a thread on a forum (albeit a rather good one).

ShellFolderFix does what every OS is supposed to do, and Windows did reasonably well up until very recently, that is, remember where you put your windows. ShellFolderFix does it automatically and unobtrusively and is a must-have for anyone who cares about their desktop layout in Windows 7 (and probably 8).

So Now I have a working desktop, right? Well okay, not quite.. And so on and so on, putting back all the stuff I've relied upon for years and years. Oh dear... Microsoft, eh!