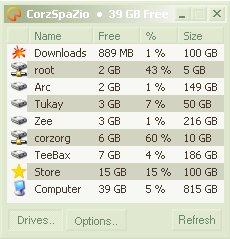 ~ Improved the recycle bin emptying. The (ToolTip) messages are more descriptive, with proper pluralization and such. Also, the number of items deleted is now reported in the message.

~ Recycling messages can now be placed in CorzSpaZio's title bar, rather than a ToolTip, if you prefer (at-a-glance settings).

+ You can now choose whether or not CorzSpaZio has a taskbar entry. This (enabled) is mainly for folk that like to use Win+M a lot, to clear their desktop. Note: After doing a minimize all, CorzSpaZio will require two clicks on its tray icon to be restored.

The preference for this isn't ideally placed, I know.

+ Added a "SizeAll" cursor to the draggable area, for the mouse hover.

* Fixed a minor bug where dragging a wav file onto the audio alert input wouldn't update the input to the new wav file (nor test it) if the wav had already been already imported. CorzSpaZio will now appear to behave as if you had dragged a whole new WAV file, selecting and testing it, whilst doing no actual import. In future, just select it from the list!

* Fixed a bug where choosing black did not reset the background color to it's default setting, as it is supposed to.

+ You can now set the foreground (text) color for the list. This will be useful if you prefer a light-on-dark type color scheme, or muted colors or whatever you like.

~ The automatic Alt row colouring now uses proper luminance values to shift the color darker, preserving the color scale accurately. In other words, your alt color won't be so grey. Along with the new foreground colouring, this makes the listview potentially quite pleasing on the eye.

* Fixed a bug where the low space icon wasn't being set at launch time.

Downloads, updated screenshots, and so on, at the CorzSpaZio page.

Bugs? What bugs? Juggling two energetic boys (of very different ages) on Coronavirus lockdown, I'm unlikely to have them all fixed any time soon. Mail me! to prioritise!