What's this all about?

Okay, I was young, and it may seem a silly poem in many ways, but like triangles, there's more going on than meets the eye; I want to give you the image still, words and picture. Simple, triangles within triangles.

I was problem solving a thing with completely the other half of my brain, and at that moment considered it a feminine thing; my intuition reaching the truth, rather than some intellectual reasoning process, or worse; the desires of that dark third aspect of humanness; my animal self. It struck me that the approach is well employed in other areas, and I visualised the mandala to convey the image, illustrate and aid in that process. Focus. 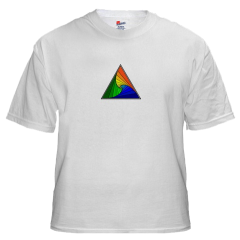 All three sides in balance, Triangles, as if some perfected being might look back along the length of their lifetimes, and see the balance as it is, from start to finish, end-to-end, and know that for all it's higgeldy-piggeldyness; one day here, another there, phases and fads, waxing and waning and meandering journeys; the path was straight and true, right to the center. If all life is a spiral, then these triangles within triangles might afford us a better perspective of the thing; from underneath, and split most definitely three ways, as we are.

Infinity is not rendered, but it is suggested, each successive triangle turned left a bit and smaller, vibrating at a higher frequency, shorter wavelength, transmutation of thought and energy, and on into infinity. At its simplest level, it is a representation of the Stairway to Heaven, which is a State of Mind.

I'm thinking about how I might sit on some park-bench, and how that grubby old man next to me might have, in fact, completed his life's tasks, while I, in my Versache top and spangly Rolex (I don't wear a watch, by the way) may have spent my entire life altogether avoiding the issue, just earning and learning very little of the real stuff. He may have come leaps and bounds, conquered worlds, and might just be there for fun, en-joying how lesser mortals react to his obnoxious stench and torn clothing, and wondering if any of us can see through the exterior of things, and maybe ask for help, which he would readily and magnificently give. But you have to ask. 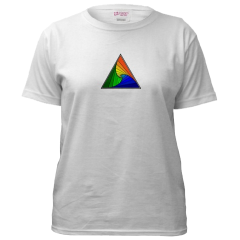 I realized that in order to achieve this state of seeing; this balance, devoid of self and self-interest; one would at the least need to look at the thing from completely the opposite point of view. And so, as male and female principles the world over come together; yin and yang; a centre point, a balance can be achieved in our thinking. And we would see the truth and it's opposite, which is also truth. And we would not be there.

And there it is, Mathematics, cold and numerical to the casual observer, esoteric only because better ways of seeing its astounding beauty are rarely taught in "lower" schools. Do only "advanced" methods exist? Not likely. Seek out Disney's wonderful Donald in Mathmagic Land (1959) if you need proof.

"Mathematics for Women" is a Mandala of mine, a contemplative charm for when I need to remove myself from my point of view. To balance all thoughts and focus only on the truth of a thing. Perhaps if one approaches a thing as a Women might more naturally approach mathematics, one may see beyond exteriors.

"Mathematics" is a word we use to describe this particular branch of science, the one that attempts to calculate Nature's numbers. It's just a name.

If you put Mathematics For Women on your body, it works like a charm, attracting cosmic energy, as well as curious people, of course. A shirt is ideal, with the mandala in the middle of your chest, working right there over your Solar Plexus. I recommend you click on one of the shirts on this page, and get yourself some of that! 1000s of pages in milli-seconds